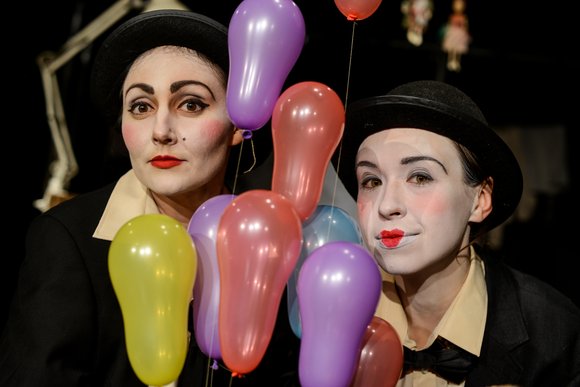 Running time: 50 min (without the interval)

Balloonists is a story for the youngest audience about why it’s worth to dream and think outside the box, but it’s also a wonderful encounter with puppet theatre.

Yes and No generally don’t get on, but this time (despite their differences) they decide to tell an extraordinary story. In a walled city no one has seen the outside world for years,and the evil Mayor supervises the work of the population with a watch in his hand. What will change in the life of the town when someone is born on the other side of the wall, someone who doesn’t care about any rules?

This is a story of a world from a bird’s eye view. The hero is a young boy who shouts “No!” as soon as he’s born. As he grows up, his proud attitude is more and more in conflict with the world around him. This negativity does, however, conceal a creative force. One night the boy rises above the Earth and in his dream journey he encounters a celestial town. Only those who are not afraid to have dreams and whose ideas have changed the world are allowed to enter. There he meets, for example, Marie Curie or Thomas Edison.

The structure of the show and the puppets are inspired by the work of the American director and scriptwriter, but also illustrator and animator, Tim Burton, famous for films such as Beetlejuice, Charlie and the Chocolate Factory, or Alice in Wonderland. The puppets were designed and constructed by the set designer and sculptor Justyna Bernadetta Banasiak, a graduate of the Jan Matejko Academy of Fine Arts in Cracow.

The charming structure of Joanna Zdrada’s show, in its storyline inspired in part by the experiments of 18th century ‘balloonists’ (especially Bartolomeu de Gusmão), is aimed at children as young as five. The story of the indomitable ‘balloonist’ will, as I witnessed during the premiere, arouse enormous interest from a young audience. Having said this, some of the ‘scary’ scenes, particularly the impressive entrance of the Mayor (the demonic scowl of Andrzej Żak with his loose-fitting coat and an enormous moustache), caused quite a stir and some fear, as the children made clear. The story itself, while captivating, if a little too long and wordy in the introduction with Yes and No, is an original re-interpretation and expansion of pop-culture’s encouragement to ‘pursue your dreams’. At the same time, Zdrada and Szwarc defy the stereotypical image of the dreamer, in the sense of the withdrawn figure, closed and immersed in unproductive lethargy. The story of the boy, essentially uncomplicated as regards plot, puts this all together in a way which is clear and understandable for the youngest audience. Here the day-dreaming itself is understood primarily as critical and active participation in the world. Dreaming is a contribution to change, an impulse which initiates the new and opens up the unknown and which lifts you up above it all and allows you to take a new perspective on the world.