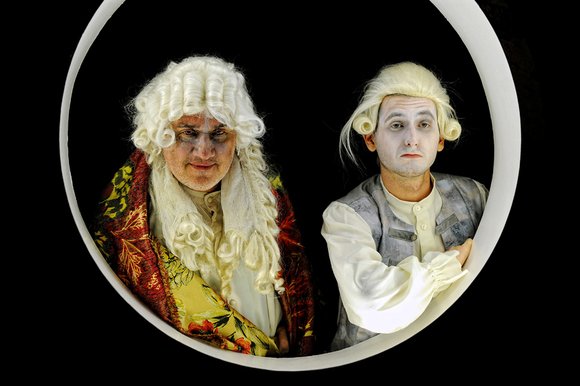 The performance is an adaptation of the book "Ciepło-zimno. Zagadka Fahrenheita", one of the Gdańsk Trilogy series by Anna Czerwińska-Rydel, dedicated to famous natives of the city.

The production is an innovative combination of theatre and research laboratory, which allows for a greater stimulation of children's imagination and helps build a fascination with scientific experiments.
The performance brings dramatisation into the chemical and physical laboratory space. While narrating the story of his life, Fahrenheit enlivens lab space, brings to life alembics and phials, and becomes involved in experimentation. The artists create worlds, characters and situations with the use of substances most characteristic for the physicist and at the same time present a curious puppet theatre which emerges from the experiments in the lab.

Expert chemist, Przemysław Mietlarek, has been engaged in the play, while additionally responsible for the preparation of chemical reagents before each performance. Set designer Michał Dracz designed original puppets, which are partly created onstage as a result of experiments or animated with the help of laboratory tools.

The main subject of the play is the importance of living with a passion and consistently striving towards a pre-set goal. Fahrenheit becomes an example of a hero who shows how much can be achieved with such an attitude, while demonstrating that such conduct also demands a great deal of courage, persistence and risk-taking.

The incredible puppets, animated by actors and at the same time "coming to life" thanks to chemical reactions, are the greatest attraction of the show. The "experimental" side of the production is overseen by a chemist – Przemysław Mietlarek from the Smart_lab group. On stage you get to see the mayor covered in frothy soap bubbles, Fahrenheit's uncle depicted as a steaming lump of dry ice, the merchant to whom the young Fahrenheit is apprentice in the form of a crane, or the school rector resembling an archetypal eyeball. The actor character of Professor Romer is also striking and reminiscent of sci-fi movies. The spectacular puppets and other special effects (including the presentation of a letter written in invisible ink, which draws cries of delight from the audience) all attract children's attention, develop their imagination and involve them in the contents of the story.

It's a story of the life and the mysterious death of a scientist, illustrating the habits of the time and the relations then current in society. The makers of the play do not go for copying illustrations from history textbooks, though. Instead they combine classical attire and wigs of the burghers of the time with absolutely innovative puppets. Michał Dracz's fascinating projects, brought to life by the theatre's arts workroom, are a true display of the imagination of the set designer and the skill of the puppet makers.

[...] No matter whether we treat this production as an interesting history lesson, a curious crime intrigue or a parable with an important message, the authors have steered clear of pathos and Fahrenheit himself remains a true-born hero from start to finish, just like all of us, afraid, worried, happy and excited. In the Miniatura Theatre Daniel Fahrenheit comes down from his pedestal, which isn't easy in a clash with history.