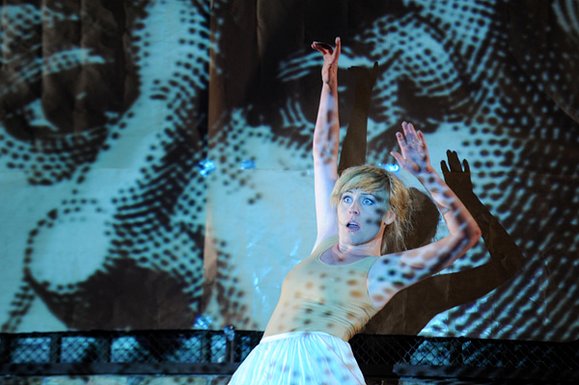 Thermidor of the year 143

An open-air performance based on the dramatic works of Stanisława Przybyszewska and the stage novella "Sny Przybyszewskiej” ("Przybyszewska's dreams") by Maciej Rembarz.

In the summer of 1935, at the Polish school in the Free City of Danzig, Am Weissen Turm 1 (now ul. Augustyńskiego), the 34-year-old author of dramas on the freedom and terror, grandeur and destitution of the French Revolution, Stanisława Przybyszewska, lay dying in the now non-existent hut number 12, exhausted by poverty, hunger and morphine. Let us imagine that in those days of voluntary loneliness and isolation from the clamour and turmoil of emergent Nazism and the silence of the Soviet gulag, apparitions of the writer's characters are forcing an entry through the windows, thin walls and bitumen roof of hut number 12, the protagonists of unfinished discussions on the beauty and terror, loyalty and betrayal, crime and glory of the Revolution: Danton, Saint Just and Robespierre himself – the justified, the beloved one…

It was summer - July and August; the terrible month of Thermidor according to the revolutionary calendar. On 10 Thermidor 142 years earlier, Robespierre was guillotined; on 28 Thermidor in the 143rd year of the Revolution (15 August 1934) Stanisława Przybyszewska died.

...A few subsequent scenes are simply hypnotic - like the symbolic guillotine fragment (with the actors sliding down a ramp from a building) or the quite good – if quite scarce – choreography prepared by Anna Steller and Magda Jędra. Mood is also evoked by the expressive and curious music by Katarzyna Klebba, Paweł Paluch and Piotr Pawlak and by the songs which appear in the performance.

...At this moment, for the creators of „Thermidor”, the character of Stanisława Przybyszewska becomes a pretext to evoke – and juxtapose – two great social upsurges: the French Revolution and German Fascism, as well as their gruesome consequences. And, although a revolt is a value in itself (coming about as it does as an act of dissent against an unjust reality), it often leads directly to bloody massacres, with the freedom of the individual turning to the brutal rule of the guillotine or gas chamber, as Lech Raczak appears to be saying with his show.

The performance calls for concentration, so rare in street theatre. Here every gesture is meaningful. Instead of wide-scale, impressive stage work the creators of "Thermidor..." opt for minimalism, theatrical pose and suspense of action...  The show is an ambitious and unique proposition, entangled in the reality of the Free City of Danzig.

Set design and costumes projects for the performance by Piotr Tetlak and Ewa Tetlak.