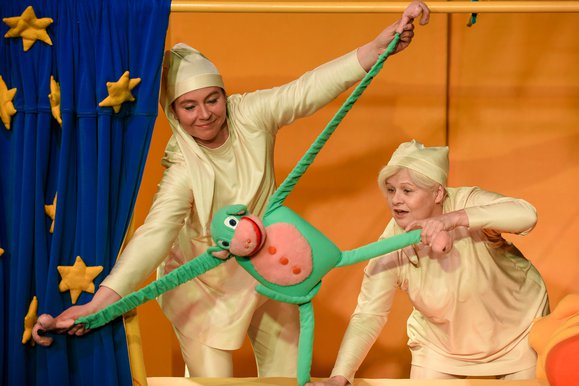 A performance especially for a very young audience, aged between one and four. With no words, it uses the child's language of sounds, colourful images and atmospheric music to stir  all the young audience's senses by smoothly and gently drawing them into the world of theatrical illusion.

In his dreams, Jacuś transports himself to deepest Africa, where he meets a giraffe, monkeys and an elephant and has lots of great adventures with them. The boy copes really well, even though he can't speak, thanks to his courage and his happy nature. Since it is designed in the shape of a child's room, the theatrical space allows children to grasp the performance freely. They don't sit in traditional seats, but on cushions scattered on a soft carpet. The pleasant colour scheme of the set design and the charming music based on African rhythms with elements of lullaby complete this warm and soothing performance for toddlers.

Miniatura has a performance for the very young, full of charm and wisdom. Best suited for two and three-year olds, but younger and slightly older pre-school kids would also watch with curiosity. Their smiling faces at the end are the best form of criticism.

At the end, one more surprise awaits the audience: they can cross the boundary between audience and actor, by going through a specially laid out tunnel, and under the very noses of the actors, explore every nook of the theatrical space. "African Adventure", which was designed for toddlers by 'Miniatura'  Theatre, should stay in their memories for quite a while. It's hard to imagine a better idea for the very young as their first visit to the theatre.