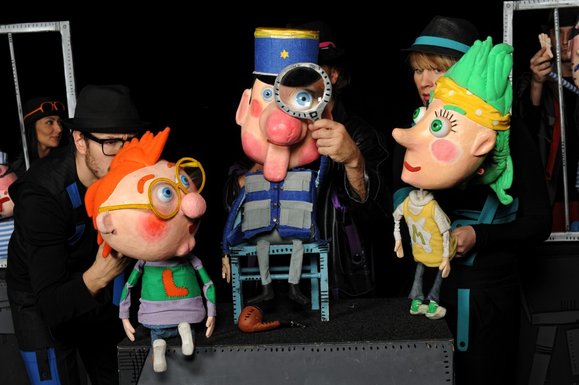 The world premiere of the theatre adaptation of “The Diamond Mystery”, the first book in the bestselling detective series by Martin Widmark. The “Lasse and Maja's Detective Agency” series tells the story of two school friends, Maja and Lasse, who set up a detective agency and help solve mysteries in the fictional town of Valleby.

“The Diamond Mystery” is an Agatha Christie-style crime mystery for the very young, children aged 6 and above, with a thief, suspects and a pair of clever detectives. The performance contains elements of interaction with the audience – the actors assume the roles of journalists who not only describe the main characters' adventures but also conduct an investigation with the help of the audience. They collect evidence, carry out interviews and draw their own conclusions. The young audience is given the chance to feel like detectives or journalists themselves.
The production is enhanced by a detailed miniature model of the town, where the architecture draws on characteristic landmarks of Gdańsk. There's a camera going down the streets, recording selected scenes, following the main characters' footesteps and the dangerous police chase after the getaway car.
The play is full of humour, dynamic, surprising and unconventional, which helps to blur the border between the stage and the audience. It is also the first episode in a theatre series for children; the next part,  “The Cinema Mystery”, is also in the theatre's repertoire.

We take a peek at the small sleepy town of Valleby, where normally nothing much happens. Until there's series of robberies from a jeweller's shop. School friends, Maja and Lasse, from an amateur detective agancy, have to discover who has been stealing the diamonds. The investigation is followed by journalists from a local newspaper who come out to meet the audience. They ask questions. They write down the evidence. The audience react spontaneously…  A Tri-City band, Old Time Radio, have composed original music to accompany the play. In it you will find fragments inspired by crime noir, Bogart films or  the works of Quentin Tarantino…  A round of applause for the music, set design, the idea of the town model and the camera and for quality literature for children. 'Miniatura' Theatre's latest premiere can undoubtedly be considered a success.

The play takes place on three planes, the live plane with all the actors playing journalists or members of the camera crew, the puppet plane where we discover the literary adventures of Lasse, Maja and the other characters, with some events based on the story of “The Diamond Mystery” converted into a miniature model of a town, shown in detail with the help of a camera.

'The Diamond Mystery’, Gdańsk's 'Miniatura' Theatre's latest production, is a lively, daringly directed crime story to entertain children and adults alike… The set design by Dariusz Panas is simple, yet imaginative -  apart from the town model, there are only three cupboards on stage, reminiscent of 1960s office decor, which, supplemented by single elements (such as metal bars or a showcase with precious stones) in subsequent scenes, serve multiple functions as Lasse and Maja's room, the police station or the jeweller's shop. The puppets themselves (also designed by Dariusz Panas) are excellent as well, especially the exaggerated Muhammed Carat and Lollo Smitt, in a blond Elvis style. The distinctive puppets are, on the one hand, linked to the book illustrations, and on the other, Panas has introduced a great deal of his own ideas into their design.

Where an excellent text (apparently Martin Widmark is the most frequently borrowed author in Sweden, having dethroned even the legendary Astrid Lindgren in this respect) meets the fresh and open attitude of a young, though experienced, director (Ireneusz Maciejewski has taken part in over 50 theatre productions and has a few successful adaptations under his belt), it is bound to result in something interesting. Funny, surprising and unconventional – these are the three words I would use to define this play.