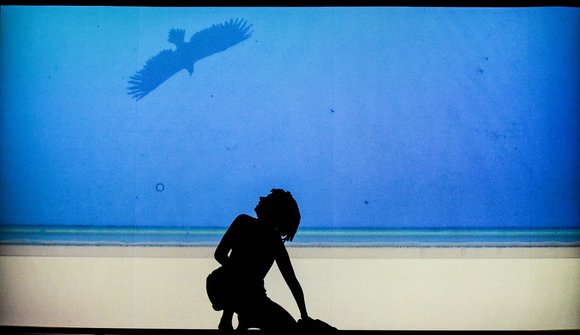 based on the novel "The Weight of Water" by Sarah Crossan

Twelve-year-old Kasieńka and her mother leave Gdańsk for Coventry in the UK in the search for her father, who had moved there to work and vanished without a trace. She goes to a new school where everyone looks down on her because of her poor English. Kasieńka is a universal tale of struggle against reality, of accepting and overcoming difficult truths, of prejudice, friendship, first love and the power that comes from discovering and realising your passions. In its approach to the theme and through its direct, genuinely emotional and dynamic structure, this is not only a story for teenagers.

The show is based on the debut, blank verse novel by Sarah Crossan, which has won many awards, including the CBI Eilís Dillon Award, UKLA Book Award and German Luchs Preis.

Kasieńka takes you by the throat and moves you, giving adults and teenagers something to think about. Authentic and honest, it is an excellent option for a teenage audience. It could also provide a starting point for teachers in a discussion on tolerance, alienation, peer relations, and the problems of maturity. There aren’t many such shows in the Tri-City, which is why it’s worth choosing this one.

Wieczur-Bluszcz, although faithfully following The Weight of Water, does not leave this world in greyness and sadness. The sadness, which here is a result of maturity in the perception of reality, is counterbalanced by the ‘trivialities’ which mark the subsequent stages of maturity – the first kiss, punishing the malicious friend, making up with Dad.

The attractive, beautiful, and at the same time very legible theatrical structure of Kasieńka … contains wise and honest components. It does not overdo the brutality neither in its imagery nor its content (although in the context of Polish emigration it easily could), but by avoiding crude realism, it discusses the issue better that any (good) press article.