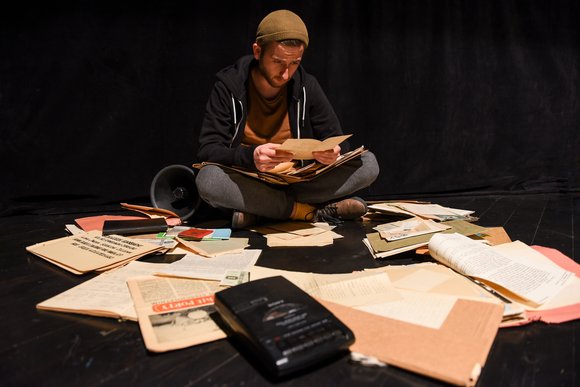 Director Wojtek Zrałek-Kossakowski invited a group of young people to examine histories of their own families in post-WW2 years. Some of them were lucky being able to converse with their grandparents personally, and to record their oral histories. Director reconstructed the figure of his own grandfather, social and political activist and Gdańsk voivode in the period 1946–1950, on the basis of archive materials, family correspondence, press features and recollections of living individuals.

In the performance, personal destinies are interlaced with history of Gdańsk in the dramatic period of political breakthrough. Performance also refers to eminent publications describing postwar reality – ‘1945. Wojna i pokój’ by Magdalena Grzebałkowska, ‘Gdańsk – miasto od nowa’ by Piotr Perkowski. ‘Gdańsk Tapes’ is a tale of discovering family mysteries and getting to know where do we come from, but also a story set in hard times and difficult choices that people were forced to make. Formally, the performance is inspired by radio-play.

Wojtek Zrałek-Kossakowski, artist working in the crossroads of theatre and music, dramaturg of Warsaw-based Teatr Studio, is an author of the script and performance’s director. As a dramaturg, he collaborated with, among others, Zbigniew Brzoza, Natalia Korczakowska, Krzysztof Minkowski, Katarzyna Raduszyńska. Important aspect of sound design and music has been dealt with by a composer and sound engineer Marcin Lenarczyk, author of (among others) sound installation constituting a part of ‘Hotel Polonia. Budynków życie po życiu’ project awarded with Golden Lion at the 11th International Architecture Exhibition in Venice. Stage design and costumes were taken care of by Anna Met, who collaborates with (among others) Natalia Korczakowska, Anna Smolar, Wojtek Klemm and Iwan Wyrypajew.

At the table with a pile of documents and tape recorders, we can see an archivist (Andrzej Żak), who tries to systematize knowledge contained in the recordings of old inhabitants of Gdańsk that recollect wartime and postwar period, and in the materials concerning Stanisław Zrałek (played by Jakub Ehrlich), director’s grandfather, communist activist and postwar Gdańsk voivode who later managed the construction of Nowa Huta. In a certain instant, memories of Gdańsk inhabitants become only a background, while the preformance turns into a very personal conversation between director and his grandfather, where his grandson – showing family photographs from the future – asks his ancestor whether he wasn’t aware of the abuses and crimes committed by communists in Poland, why he chose this particular path and whether there were no doubts about its justified direction.

Claustrophobic space of the performance itself is surprising (Anna Met’s stage design is both interesting and well fitted in the entire show) as it strikes associations with air defense shelters used during air raids by the civilians during World War II. Semi-darkness, flickering light with sound effects (prepared by the composer of the performance’s soundtrack Marcin Lenarczyk), mattresses laid on the floor on which spectators sit down among initially indistinguishable actors – it all creates an impression of audience participation and closeness to histories that are presented.