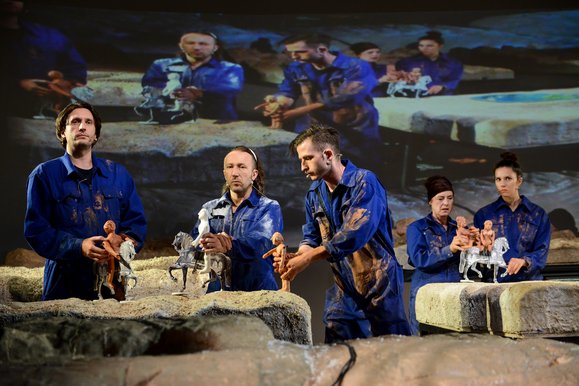 based on the novel by Henryk Sienkiewicz

The First Award of the 28th Puppet Theatre Festival in Opole

Award at the International Festival ‘Theatre Carousel’ in Łódź “for finding contemporary contexts in the classics, characters that are in tune with our times, but above all the power of the final scene”

The first adaptation of the novel by Henryk Sienkiewicz, a Polish Nobel Prize winner for Literature, for puppet theatre.

The Teutonic Knights is a historical novel set in the Middle Ages, during the conflict between Poland and the Teutonic Order, culminating in the famous Battle of Grunwald in 1410, possibly the greatest victory by Polish forces. The main characters in the story are the knight Maćko of Bogdaniec and his young nephew Zbyszko.

Sienkiewicz’s work is an excellently told story which can captivate young and older audiences alike, make them laugh and move them at the same time. The puppet theatre allows us to present it in an interesting and complex way, with a multitude of settings, characters, with bear or auroch hunting scenes or finally with the grand Battle of Grunwald.

The play was directed by the renowned playwright and director Jakub Roszkowski, while the set design and puppets are the work of one of the most valued contemporary Polish set designers Mirek Kaczmarek.

This is a new face of the theatre of form, a theatre which seeks out new and at times surprising forms of expression. I also very much liked the authors’ distance from the text, with the story told in a humorous way, without pathos, and the characters, especially Zbyszko (Wojciech Stachura) as a modern-day hot-head and Jagienka a teenage girl in love.

The clay figures of Zbyszko of Bogdaniec, Danusia, Jurand of Spychów or Jagienka are very similar to each other and almost blend into the background. But if anyone thinks that this show is visually unappealing, they are wrong. It is true that it is rather low-key, low on special effects and almost monochromatic but brilliantly acted by the puppet actors, dynamic like a horse in gallop, modern (!) and dazzling with humour. And it is the humour for which I like Miniatura’s The Teutonic Knights the most.

[...] On the other hand, the formal resolution of the finale is rather impossible to foresee, it is so ingenious and original. And that’s what makes Gdańsk’s The Teutonic Knights, told jokingly and with zest, an extremely serious pacifist manifesto.

The show’s form forever reminds us that we are dealing with delightful games with the imagination. Roszkowski has arranged the adventures of Sienkiewicz’s heroes on three planes, the first filled with clay figures, the second occupied by actors who every so often cast the figures away and take over acting out particular characters. The third plane can be seen on the screen at the back of the stage which shows the current progress of action on stage. Nothing in this production is rigid, the borderlines of all the events are fluid and unpredictable for the audience.

The director has successfully managed to render the adventure-cum-romance thread of The Teutonic Knights. The voluminous novel as we know it called for some abridgement but the most important and favourite threads remained. Here we have then the young Zbyszko (Wojciech Stachura), Maćko (Jacek Gierczak), Jurand (Andrzej Żak), King Jagiełło (Hanna Miśkiewicz), the delicate Danusia and the tough Jagienka (both played by Edyta Janusz-Ehrlich). We also have some villains represented by the wicked Teutonic knights – Zygfryd (Jacek Majok), Rotgier (Jakub Ehrlich) and the Grand Master (Joanna Tomasik). Roszkowski sets them against each other in very cleverly thought-out scenes in which the austere, nearly monochromatic and very static space seems to be in constant colourful motion. The romantic meeting with Danusia, the Teutonic knights’ trickery, the valiance of Jagienka, the scenes of hunting and duels  – in all these adventures the world is still split into good and bad but this is not the extremely one-dimensional good and bad as often happens on the pages of a literary original. […] This lively and colourful production has somehow lost the pathos and saccharine quality of The Teutonic Knights the novel and what has remained is distinct and very sharp wit, thrill and adventure.

Characters of King Jagiełło and Grand Master are performed by women (Hanna Miśkiewicz, Joanna Tomasik), which doesn't soften the picture of history, but intensifies the distance toward it. Roszkowski skillfully slips by mythologised picture of this war as a national crusade against longtime enemy by mixing different poetics of adventure and initiatory novels, historical romance and comics. (…) Softening of national antagonisms in the performance is non-contingent – it helps building the symmetry, which will be a compositional frame of the final scene. And that finale is brilliant.