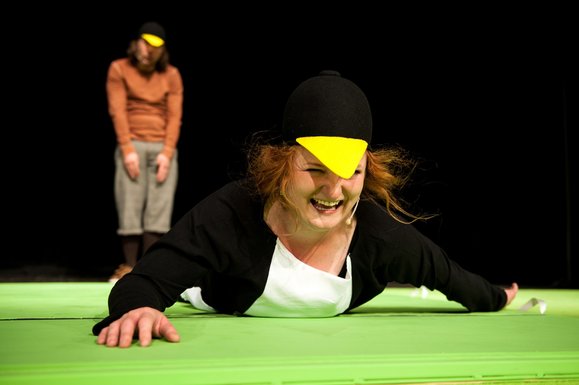 The amusing story about the friendship of a penguin who has escaped from the zoo and a turtle, thrown out by its owner. Pinia and Franciszek meet by accident and go through lots of funny and sometimes dangerous adventures. On the way they even meet ghosts of the Kashubian forests – Ciotka Borowa and Purtek. Be a Friend is a musical show where the music even comes from … the set.

Besides the animal heroes, the director introduces a range of ecological subtexts on the topic of˝Respect Nature” prepared by all the inhabitants of the forest in a mutual manifesto to humans. Tomasz Man has put the whole thing together with humour and class, creating a successful modern fairytale, full of accurate observations and with a good moral.

Be a Friend is a clever piece, fine-tuned, contemporary, with a script tested by the author on his own children. A very cohesive and harmonious show, not over-wordy in style and emotive.

Teatr Miniatura’s new show tells the story of Pinia the penguin who has escaped from the zoo and Franciszek the turtle who has been thrown out by his owner. These two incompatible, egoistic (but nonetheless likeable) animals wander through the forest in order to reach the sea. On the way they meet wolves, a deer, a hare, a bear and other creatures. It might seem that the idea of staging a play in which almost all roles were assigned to animals would be old hat. However, this stage story about animals is surprising in its simplicity, entertaining in its ideas and says a lot about the human world. (…) Thanks to the fine acting, the close-knit team and the excellent sound, the show is bursting with energy.