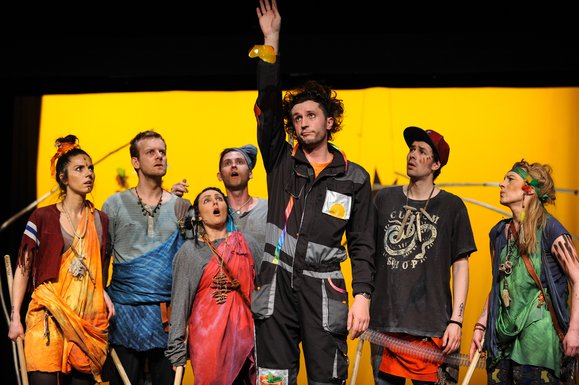 The performance forms part of “The Blue Planet” artistic project, financed from EEA funds from Iceland, Liechtenstein and Norway, as well as national funds. The project is run by the Miniatura City Theatre in co-operation with the Association of Independent Theatres in Iceland.

The performance is the Polish premiere of the play by Andri Snær Magnason, one of the most important contemporary Icelandic writers. It is a theatre adaptation of the widely acclaimed The Story of the Blue Planet, winner of such awards as the Janusz Korczak International Literary Prize, and translated into over 30 languages. It tells the story of a planet inhabited exclusively by children, where one day the first adult appears, a space vacuum-cleaner salesman, Jolly Goodday. And this where the magical and beautiful but also struggle-ridden adventure begins.

“The Story of the Blue Planet plays a part in Iceland’s intense ongoing debate on the protection of nature and natural resources. It shows how politicians employ false rhetoric in order to mislead voters and satisfy their own means, and what the consequences of such actions can be. But, despite the fact that the book was written under rather particular circumstances, it has a much wider dimension, asking questions as to our responsibility for the Earth as a whole”: Erling Jóhannesson.

The performance brings together an international team of artists. Erling Jóhannesson is an Icelandic actor and director, co-founder and artistic director (1994-2009) of one of the largest professional independent theatres in Iceland – The Hafnarfjörður Theatre, whose main repertoire is based on contemporary Icelandic drama written for the theatre. The set has been designed by Iza Toroniewicz, author of set and costume designs for over one hundred Polish productions, including several puppet plays, and the music composed by múm, one of the greatest stars on the Icelandic music scene, who have recently promoted their sixth studio album, Smilewound, through concerts in Poznań, Wrocław and Warsaw.

‘The Blue Planet” (based on a best-selling Icelandic book) is a story filled with adventures, in which children will find what they like best: plot twists, magic, humour, horror and a happy, though not obvious, end. […]

‘The Blue Planet’ is also an allegorical fairy tale about the modern world and its problems – dangers related to the destruction of nature, consumer behaviour, power and manipulation or armed conflict. But it is also a tale of friendship, the need for closeness, altruism and dreams which can change even the cunning inter-planetary vacuum-cleaner salesman. The Icelandic director Erling Jóhannesson presented it in a charming way, by means of evocative theatrical tools. However, there’s no place for showiness nor for attempting to win the young audience’s affection at any cost. The makers of the show keep testing the children’s imagination and, judging by the audience’s reactions, are not disappointed in their idea.

The performance wins you over not just with its subject and by drawing your attention to the fact that interfering in the natural environment can have tragic consequences. The moving ‘battle’ of wits between Jolly Goodday and Hulda (and Brimir) is drawn to a smart conclusion. ‘The Blue Planet” proves that, based on simple means and a good script, one can create a valuable performance for children, without the use of multimedia or ‘winking’ towards the adult audience.