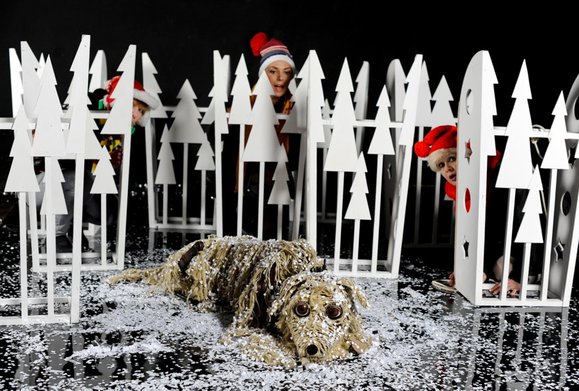 Baltic. The Dog on the ice floe

based on the book "Baltic. The Dog that floated on an ice floe" by Barbara Gawryluk

We would like to thank the National Marine Fisheries Research Institute, Ewa Baradziej-Krzyżankowska and Adam Buczyński, as well as the entire crew of  R/V Baltica for their help and friendly reception.

We would also like to thank the Gdynia Marine Metereological Forecast Office of the Institute of Meteorology and Water Management  for providing footage of the rescue.

Do you remember the story? About the dog in 2010 that floated down the Vistula on an ice floe and was finally rescued, frozen and terrified, by the crew of a research ship from the Gdynia Fisheries Institute R/V Baltica in the Bay of Gdansk, fifteen miles from shore?

The story found its way onto news sites all over the world. Internet users wrote: "Stories like this restore your faith in humanity", "there are two types of people in the world - those who say: "It's only a dog after all" and others - on a higher ethical plane - who understand how wonderful this news is." After the rescue Baltic the dog was a member of the R/V Baltica crew and an honorary canine citizen of the City of Gdynia. Together with his owner, Adam Buczyński, he received hundreds of letters from every corner of the world, including a letter from Brigitte Bardot saying "Thank You" for the rescue of Baltic. Adam is also a member of the Gdynia branch of  the Animal Welfare Society .

The incident was described by Barbara Gawryluk in the book "Baltic. The Dog that floated on an ice floe", which inspired the director Romuald Wicza-Pokojski (Miniatura's manager) to adapt it for the stage as a documentary performance for children. The artists went to visit the hero of  the tale several times on R/V Baltica, met the crew and heard the whole story straight from eyewitnesses.

"Baltic. The Dog on an ice floe" is meant to be a Gdansk version of "A Christmas Carol" reminding us that virtues such as kindness, sympathy and care for the weak are important for us all the time. It's not only about relations between people but also between people and every other living being.

The performance was prepared by an unusual team of artists. It was directed by the manager of Miniatura Theatre, Romuald Wicza-Pokojski, who apart from putting on 'institutional' theatrical events  (such as "Diary of a decade of homelessness" or "When they come to burn down the house, don't be surprised" in the Wybrzeże Theatre in Gdansk), has also been running his own Teatr Wiczy since 1991, with events to his credit like the Offeusz in the MALTA International OFF Festival (for "Crackers") and the prize for innovation in puppetry at the World Festival of Puppet Arts in Prague (for "Broken Nails: A Marlene Dietrich Dialogue").

The set is the work of Mariusz Waras, an artist familiar from the m-city street-art project and a graphic artist and designer. He studied at the Faculty of Graphic Art at the Academy of Fine Arts in Gdansk, where he  now works as assistant in the studio of Professor Jerzy Ostrogórski. Waras is at the cuting edge of street art. For the m-city project, he created several hundred murals, usually on the outside walls of buildings all over the world, from Gdansk via Berlin to Jakarta. The set for "Baltic ... " is his stage debut.

Michał Jacaszek is behind the music for the event. He is a composer and producer of electro-acoustic music, linking sounds prepared electronically with real instrumentation and has four albums, musical illustrations of poetry and prose, plus film, theatre and radio scores under his belt. Co-operations in film and theatre play an important role in Jacaszek's creative work. In 2009 he received the Two Theatres Festival's Grand Prix for the score to the television drama "Golgota Wrocławska". He composed the music for "2084" and "Showtime" directed by Michał Siegoczyński and a musical sequence in Marc Silver's " There is no others there is only us", Jolanta Krysowata's " Nigdy nie wrócisz do domu" documentary and for Jan Komasa's film " Sala samobójców/Suicide Room".

Romuald Wicza-Pokojski tells this moving story with beautiful simplicity and subtlety and without any unnecessary sentimentality. Set changes take place seamlessly before your eyes. The performance contains a lot of magic. The cast under the captain (Andrzej Żak) successfully avoid all the reefs and shallows, sailing back to port with the rescued dog. Everything is logical and makes perfect sense.

The artwork which accompanies the performance will impress not only young audiences. Mariusz Waras's set design contains, among other things, artificial snow, a starry sky or boxes with dozens of lights to imitate blocks of flats seen from afar.

The director concentrates on the educational aspects of the tale. The audience sees heroes who want to help the dog in different ways, some controversial, as in the case of the hunters. No-one is indifferent to him. Thanks to the huge dynamics and visual and sound effects (courtesy of  music by Michał Jacaszek), the presentation will hold the attention of even the youngest spectator (the interval in this almost one-hour piece comes after only 25 minutes). A large part of this is down to a capable and cohesive group of actors, among whom Andrzej Żak definitely stands out.

"Baltic. The Dog on an Ice Floe" is simple theatre based on a clear message and very modern and topical at the same time. It is a beautiful example of how to sensitise children to the abuse of animals. The play (aimed primarily at children between 5-10) is therefore one of the best quality options for young audiences on the Gdansk stage.

In the Miniatura Theatre, Baltic's story was told in a frugal, at times poetic, manner. The dog was played by a doll made of rope and vividly animated by the entire cast. Shivering with cold, wagging its tail or falling asleep on a piece of ice, the dog captures the heart even of a grown-up audience. Members of the crew tell Baltic's story - we learn his fate from the moment he runs scared from the booming of New Year's fireworks to the moment he lands, frozen and exhausted, on board the vessel. "Baltic" sticks in your memory thanks to the unusually vivid and distinctive sets by Mariusz Waras, the well-known street artist. They consist of simple, white blocks, which suitably lit up and shuffled around can change into blocks of flats or the deck of a ship. Light plays an extraordinary role in the performance: it gives the audience in the auditorium the feeling of a winter night's chill or the meancing atmosphere of the hunt for a dog escaping through the forest.

The performance is directed for children by Romuald Wicza-Pokojski. It tells the tale of the dramatic adventures of a stray dog. The young audience follows his fate with craned necks and gaping jaws - up to the culminating moment where the actors disappear from the stage and we see authentic footage of the dog's rescue. The performance shows adults their own behaviour in a slightly skewered mirror: thoughtlessness during the firework display, indifference, faith in what we see on TV screens and not in what is really happening outside our homes, and misguided and ineffective aid. There is, however, no finger-pointing in any of this, because everything ends well - and thanks to humans.